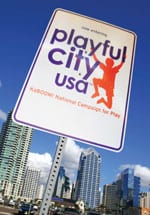 With experts continuing to predict a challenging economic forecast for the foreseeable future, officials in Arkansas will continue to face difficult budgetary choices in 2010.

Throughout the country, decision makers are frequently examining recreational programs and maintenance as targets for funding reductions. However, a growing amount of research strongly indicates unstructured play and ample play opportunities are critical to the development and overall well-being of children.

This predicament merits creative examination. Could unstructured play actually serve as a key cog in the search for low-cost and morale-boosting solutions in these strenuous times?

Playful City USA recognition is based upon an application process where communities make five commitments: creating a local play commission or task force, designing an annual action plan for play, conducting a playspace audit of publically accessible playspaces, identifying current spending on capital projects and maintenance of playspaces and proclaiming and celebrating an annual “Play Day.”

Cities as large as New York City and as small as Landfall, Minn. (population 700) have made these commitments and received the benefits of being recognized as Playful City USA communities. In 2009, 93 cities and towns from across the nation were honored by KaBOOM! as part of the Playful City USA program, including Springdale for the second consecutive year.

KaBOOM! selected Springdale for its dedication to play. The Springdale Parks and Recreation Department set a goal in 2009 to visit each elementary school to talk to the children about the value of play and persuade them to use public play areas more frequently. These visits, combined with other activities and interactions, culminated with a day of play on Aug. 22 at one of the City’s community parks featuring concerts, games, swimming and several other activities. To make it easier for children and parents to access playspaces, the City also intends to offer public play areas within one half mile of citizen residences.

More information on the Playful City USA program is available at www.kaboom.org/playfulcityusa.