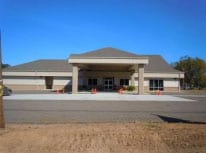 About 80 area residents showed up Monday for the grand opening of the Mulberry Senior Inn, including civic leaders, city and county officials, and area politicians.

Warren Blaylock, chairman of the Crawford County Senior Citizens Board, was master of ceremonies for the opening of the new 6,420-square-foot building.

“The senior center as well as the new city park across the street are a testament to Mulberry wanting to provide something everyone can enjoy,” Baxter said during his speech.

Medley agreed and noted that senior centers provide more than one use to a community. “These senior centers are about more than good, nutritious meals and they’re more than a social center; they are a focal point” Medley said. The Area Agency on Aging donated the land for new center.

Blaylock and site director Lori Oliver gave credit to those who had helped bring about the center, noting that it was seven years in the making.

“These things take years of planning, and it takes encouragement by groups of individuals to make these things happen,” Hall said. Hall and the Crawford County Road Department contributed gravel for the center’s parking lot.

Blaylock and Betty Bowlin, city council member and vice president of the Area Agency on Aging Board, announced that the new building was being dedicated to Betty and Arnold Feller, who had worked to bring about the completion of the center.

Betty Feller is the former mayor of Mulberry, and she began the applications for grant funding and planning of the center when she was instated in 2005.

Baxter continued work on the project, but Feller remained a part of the project and stayed in touch with those who had made her promises to contribute.

“It’s been seven years; I’d say today it’s well worth it,” Feller said after the ceremony.Feller said she is happy with the results of all the hard work, and believes the new, larger center will encourage more people to visit it.

Others who spoke during the event were State Rep. Leslee Milam Post, State Sen. Bruce Holland and resident Stacy Muntz.

Lunch was served to those attending, and Congressman Steve Womack was there at 1:30 for a cookies, coffee, and a question and answer session.