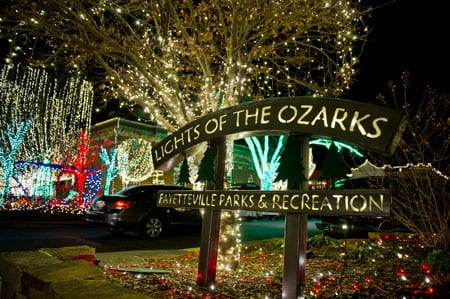 The Lights of the Ozarks, a holiday celebration of lights in Fayetteville that occurs on the Saturday before Thanksgiving and concludes on New Year’s Eve, celebrates 20 years of holiday cheer. The display started as an idea with an Advertising and Promotions (A&P) Commission retreat in 1993 as a way to increase Hotel, Motel, and Restaurant (HMR) tax in the slow winter months. George Smith, Holly Smith and Gayle Walsh were the original chairmen of the project. George, publisher of the NWA Times, moved to Fayetteville from Marshall, Texas where he had been involved in a similar lights festival. In 1994, a lighting project was in the Chamber Convention and Visitors Development Committee business plan. The committee sold lights door to door and recruited businesses along 71-B, from Drake Field airport to the NWA Mall, to light their businesses.

On the evening before Thanksgiving in 1994, a lighted fire truck started at Drake Field airport and headed north on 71-B toward the NWA Mall. Businesses along the way turned on their lights as the fire truck passed by. The fire truck circled the Fayetteville square which was lit one block at a time. After lighting the square, the truck then proceeded on to the Mall. Events coordinated with the first Lights of the Ozarks included choirs on the square, Bugs in the Lights (a VW Bug show), a Jingle Bell Jog, a home decorating contest, and a holiday parade.

Over the years, the display became centered on the downtown square. A partnership evolved between the City of Fayetteville and the A&P Commission. The A&P Commission funded a sound system that was added around the square to broadcast Christmas music during the festival and has also contributed substantially through the years to purchase lights. The Commission also coordinates all events that include camel, pony and carriage rides, choirs, photos with Santa and his reindeer, and vendors that provide hot cider, coffee, and hot chocolate. In recent years, the Fayetteville Visitors Bureau and the University of Arkansas hospitality class have organized and coordinated the parade on lighting night.

The City of Fayetteville Parks and Recreation Department installs the light display which consists of approximately 450,000 lights. Installation of the display begins the first week in October and takes six weeks to install, totaling over 2000 man-hours. In 2009, the Parks Department, with funding assistance from the A&P Commission, began converting the light display to LED lights. Because the LED light strands are more expensive than incandescent lights, the conversion process occurred over a 3 year period. By 2012, the display was 100% LED. Although the LED lights are more expensive than traditional incandescent light strands, they offer many benefits. LED lights utilize 88% less energy than incandescent lights. While this energy savings amounts to a smaller utility bill, the lower power consumption has also allowed easier installation and power distribution around the square and created a safer display, virtually eliminating power failures and overheating of receptacles. The LED bulbs also have an effective bulb life of 50,000 hours and are made of hard plastic which is resistant to breakage. This allows the LED strands to be used multiple years as opposed to the traditional incandescent strands that lasted a maximum of two years.

In 2013, the light display is being extended down Block Ave. and Dickson St. Street light poles on Block Ave. will be wrapped with lighted garland and on Dickson St. lighted ornaments consisting of snowflakes, poinsettias, and Razorbacks will be placed on the street light poles. Lights on the square are placed in tree canopies and ground cover surrounding the square.

The 2013 event dates are from Saturday, November, 23rd at 6:00 pm to December 31st at midnight. The lights will come on nightly throughout the duration of the display from 5:00 pm to 1:00 am. The A&P Commission estimates 300,000 people will visit the square during the Lights of the Ozarks display with an estimated $500,000 added to the local economy.