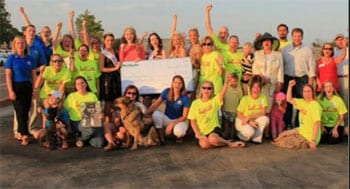 In the end, Texarkana, Ark., barked the loudest. The city was awarded $100,000 for a dog park Friday evening from PetSafe for collecting the most votes in the company’s Bark for Your Park competition. The presentation came during a downtown party that was organized before the results were known publicly.

However, a select few were clued in, including the Police Department, as PetSafe personnel were secreted into the Front Street Plaza Festival via an unmarked police car.

After a few speeches and some songs, four people in blue PetSafe polo shirts scaled the back stairs onto the stage. Robin Rhea, senior brand manager for PetSafe, approached the microphone. She introduced herself and talked a bit about the Knoxville, Tenn., pet products company.

Rhea described how the PetSafe team closely followed the competition, which in June was narrowed from more than 1,000 cities to 15 finalists.

“We watched you as you shot paintball guns at your local celebrities, and that was crazy,” Rhea said. “But then we saw (local animal rescuer) Jeff Tarpley kiss a pig. But we saw even more than that.

“We saw a community of people that were not divided by an invisible line.”

Instead, Rhea said the company saw the Twin Cities coming together in pursuit of a common goal.

By this point, the sense of anticipation in the air was almost as thick as the humidity. Rhea announced that 650,000 votes were logged in the competition.

“We got up bright and early this morning in Knoxville, and we went westbound and down to tell you that you had 167,000 votes,” Rhea said.

The crowd roared its approval as she added, “That means you get $100,000 to build your dog park! Give yourselves a hand. You guys so deserve this.”

Chrystal Sloan, one of two local women who led the effort for the park, was seated on the stage and became visibly emotional as Rhea spoke.

“I had no idea they were back there,” Sloan said after the city was presented with a ceremonial check for $100,000. “I just thought it was a cop car.

“My head is spinning.”

After PetSafe made its announcement, there was more good news to come. Mike Richardson, who owns a fencing company, announced he was donating the fencing and labor for the shelter play area of the dog park. Work on that is slated to begin next week in Jefferson Park, a portion of which will be renamed JefFURson Park. In addition to the $100,000 check, PetSafe will donate outdoor water fountains to the shelter play area.

“You guys live in a wonderful place,” Rhea said. “It’s wonderful to see.” The final vote tally for Texarkana was 167,373 votes, with second place Oak Forest, Ill., collecting 123,417 votes. The Petsafe.net leader board went dark July 25 to create suspense, but Texarkana maintained a steady lead during the last days of the competition, Rhea said.

Texarkana also got 1,000 extra votes by logging the most views of its short video, which portrayed the story of two dogs named Georgia and Jager, whose budding romance was threatened by Texarkana’s lack of a dog park. PetSafe will now review Texarkana’s plans for JefFURson park and also assist as needed, Rhea said.

“We want to make sure you guys get the park you want,” she said. “We’re here to be a resource and provide some funding.”

PetSafe representatives will return to Texarkana for the park’s grand opening.

DeAnna O’Malley, the other leading proponent of the dog park, said she hopes the park will open within a year. As she posed for photos with PetSafe officials and accepted congratulations, O’Malley pointed to her arms: “I’ve had chills in 110-degree weather all day.”

“There are no words to describe that feeling when they jumped out of that police car.”

Oak Forest will receive $25,000 as the runner-up, while Derby, Vt., came in sixth place but will also receive $25,000 for winning the “Bark From Your Heart” prize, which went to the city with the highest percentage of votes based on population.